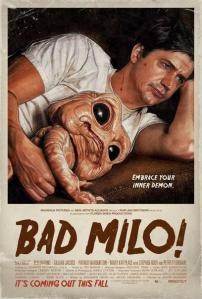 Out of ideas and at the end of his rope, Duncan seeks the help of a hypnotherapist (Peter Stormare), who helps him discover the root of his unusual stomach pain: a pintsized demon living in his intestine that, triggered by excessive anxiety, forces its way out and slaughters the people who have angered him. Out of fear that his intestinal gremlin may target its wrath on the wrong person, Duncan attempts to befriend it, naming it Milo and indulging it to keep its seemingly insatiable appetite at bay.

When presented with the plot of “Bad Milo” one can’t help be a little cautious. A movie about a “butt monster” doesn’t seem like the most palatable of premises. But in spite of initial misgivings, this movie was a pleasant surprise.

I really thought this movie was going to be more in line with some of Lloyd Kaufman’s Troma flicks after seeing the trailer online. I was prepared for a plethora of poop and penis jokes with little emphasis on story or characters. But what I ended up witnessing was an oddly charming blend of “Basket Case”, “Little Shop of Horrors” and “Gremlins.”

Ken Marino is a perfectly affable bumbling lead. His development and internal struggle (in more ways than one) with fatherhood are the centerpiece of the movie. I was quite impressed with all the supporting cast as well(Peter Stormare was exceptionally funny.)

After all the blood-splattering and crude jokes you’re left with one oddly sentimental story that may even bring a tear to your eye.