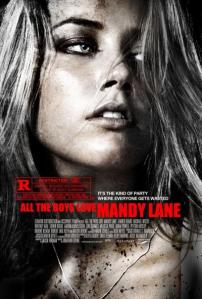 Plot Summary: Starring Amber Heard and Anson Mount, “All the Boys Love Mandy Lane” is about a group of high-schoolers who invite Mandy Lane, “a good girl” who becomes the object of everyone’s affection after returning from summer break, to a weekend party on a secluded ranch. While the festivities rage on, the number of revelers begins to mysteriously drop one at a time.

Before renting “All the boys love Mandy Lane”, I saw its trailer in the YouTube to check it out. Good cameras, interesting story and there were some good reviews in IMDb. Well, maybe I was in for a surprise. You never know. So I took the risk and rented the film. But in the first moments of the film, I noticed that this one was not different at all – it was just another brick in the wall.

To begin with, apart from the differences of sex and looks there’s nothing to really differentiate the characters in this film. Other films are able to provide simple characters (even if one-dimensional ones) with whom we can identify with. This film gives us a very superficial glimpse of the characters, their relationships, conflicts.. What we see in “All the boys love Mandy Lane” is just a bunch of stereotyped American teenagers like we’ve seen so many times before.

And how is Mandy Lane? Mandy Lane, as portrayed by Amber Heard, is just your typical high school girl. There are many girls like her – in any high school there are dozens of Mandy Lanes. Amber Heard has nothing really distinctive about her. She’s pretty, that’s all. Then, why do all the boys love Mandy Lane? This is a film, that’s why.

That said, let’s go to the film. As you well know, all the guys are mad about Mandy Lane. The boys (with the help of the girls) prepare a party. Mandy Lane is invited to this party. The party is to take place in an isolated ranch. No one had succeeded till now in scoring Mandy. The objective of this party is to ease things out. A girl in the group wants to make it with a guy, there are rivalries, frustrations, and last but not least, there’s someone that loves Mandy so much that he/she is ready to kill for her. But make no mistake, anyone will guess from the beginning who the killer is, but prepare yourself for a wild twist that will put everything upside down.

If the script had managed to give us flesh and body characters and describe in more detail the relationship among the characters (their emotions, their conflicts…), this film could have been a memorable slasher teen flick. Had the film been done in the right way, there would be in it a growing sense of fear, of encirclement. Conflicts, fights, suspicion, and death advancing on and on.. outside just the empty fields… but the film is unable to build up the suspense.

“All the boys love Mandy Lane” is just a passable entertainment and nothing more. If you want to see a film with more substance try “High Tension” (Haute Tension), a very good french slasher flick.movieboxoffices.wordpress.com